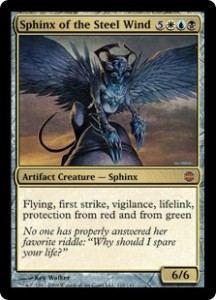 Sphinx of the Steel Wind

While playing The Cube I discovered many cards that cried out to be put in decks. Several of them required new decks since they did not fit into my limited number of leftover decks when I reentered the world of playing Magic. One of those cards was the Sphinx of the Steel Wind.

The Sphinx of the Steel Wind is an Artifact Creature – Sphinx that costs BUW5 to cast and is a 6/6 with flying, first strike, vigilance, lifelink, pro red and green. The artwork is amazing too. This card is so good in the cube it inspired me to make the bluest of my blue decks yet.

I don’t mean blue as in percentage of blue cards in the composition of the deck, I mean as in control. Blue is all about control. So I built what turned out to be my most annoying deck yet (I’m sorry but I enjoy being a blue/white player). It’s focus is card drawing/denial and its win condition is based upon casting large flying creatures. 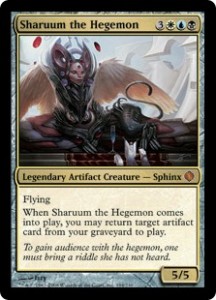 This deck went through several iterations before reaching its final form. When I first constructed the deck it struggled to reach a win. The deck would get off to a good, if slow (blue and white folks, it’s going to be slow) start and then just kind of peter out. I played it for several weeks, eliminating bad draws and establishing a consistent pattern of losses.

Since there aren’t many ways to speed up blue/white/black I had to focus on what blue and white do well: Control. So I took out some of the sphinxes and added more control. Once I was done I realized this was the most controlling of any deck I had ever made. The changes worked and now the deck actually does win on occasion. When it doesn’t win it annoys the living daylights out of my opponent so even when it looses I win.

Here is the card list for my Esper deck:

Esper
3 Jelenn Sphinx
2 Sphinx Sovereign (This is the last Sphinx I ordered for this deck)
2 Consecrated Sphinx (Soooo good)
2 Sphinx of Magosi
2 Sphinx of the Steel Wind (This is the card that started this deck)
1 Sharuum the Hegemon
1 Prognostic Sphinx
1 Arbiter of the Ideal
1 Enigma Sphinx (this is way better than you might think)
1 Sphinx Summoner
1 Sphinx of Jwar Island
1 Ojutai, Soul of Winter (Surprise!)
1 Steel Hellkite
1 Voidmage Husher
1 Ascended Lawmage (low casting cost comparatively speaking and the art fits the tone of the deck)
2 Utter End
1 Sphinx’s Revelation 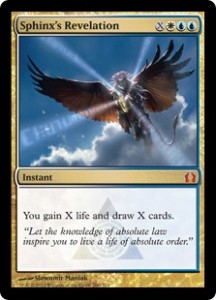 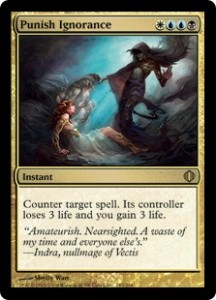 As with all of my decks, this may undergo changes as new sets come out and potentially better cards become available, or I discover them as I continue to rediscover Magic: The Gathering. K