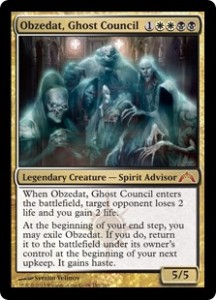 Just the week before Christmas 2014 I got back into playing Magic: The Gathering. I dusted off my two old decks and after several painful defeats reworked them, taking out some old cards and putting in some new ones. I’ve been having so much fun I decided to make a new deck with all new cards.

I started with a couple cards I knew I wanted to play and then as I chose cards that I thought went with them I began to think about what I wanted the deck to do. With my Rakdos deck it’s all about sacrificing creatures and bringing them back from the graveyard. With my Azorius deck it’s about casting large flying creatures. As I began to look at the cards I was drawn to for my Orzhov deck I found that life gain and life drain seemed to be the way the cards were going so that became the focus of the deck. 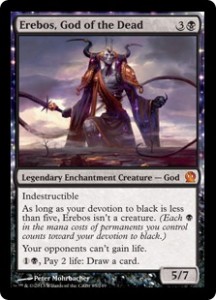 Erebos, God of the Dead

It’s awful to say but I began to look at the cards I was considering and trying to see how I could make the deck such that every time I did something my opponent was punished for it. No card does just one thing with the exception of basic land. I still managed to get some cards in the deck that I just like too. There’s always room for some cards you just like. Having a defined focus for the deck led to me building one of the best decks I’ve ever put together and it was good from the beginning.

Often times when a deck is first put together it goes through a period of tuning and refinement as a player discovers what works and what doesn’t in the deck. For my Orzhov deck that was not the case. I still fine tune it but it has worked from the first game. 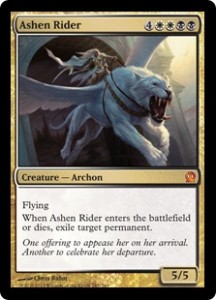 Here is the card list for my Orzhov deck:

4 Tithe Drinker (I know, I actually put 4 of something in a deck that isn’t land)
3 Vampire Nighthawk
2 Vampire Hexmage
2 Butcher of Malakir (extremely ugly but too good not to put in the deck)
2 High Priest of Penance
1 Angel of Despair (I’ve been trying to get her in a deck I got her)
1 Deathpact Angel
1 Obzedat, Ghost Council (awesome and I love the way Obzedat rolls off the tongue)
1 Erebos, God of the Dead (Ya bruh)
1 Sorin, Lord of Innistrad
1 Ob Nixilis of the Black Oath
1 Ashen Rider (this is the bad boy that started this whole deck)
1 Shriekmaw (a personal favorite)
1 Drana, Kalastria Bloodchief
1 Gray Merchant of Asphodel
1 Blood Artist (I should pick up another one of these)
1 Child of Night (foil)
1 Pulse Tracker (also foil)
1 Crypt Ghast (I need another one of these)
1 Whip of Erebos
1 Sol Ring
1 Profane Command (This card is amazing)
1 Merciless Eviction
1 Syphon Mind (I’m thinking of making this a sideboard card) 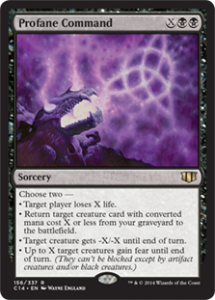 This deck is really a lot of fun to play and it’s competitive enough to win its fair share of games. K