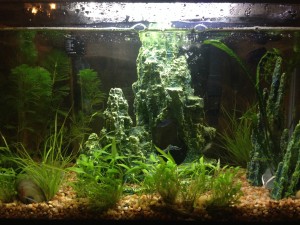 Degarla, alas my Degarla. As it turns out Degarla was a girl snail. Ebriah was not a girl snail. I discovered this when I checked the tank on Christmas morning to feed everyone and there was a gift of a clutch of eggs left on the edge of the tank. It didn’t take any time at all to discover that Degarla was the generous one who left the gift. What I did not know was that female snails will leave their ponds and go in search of new ponds to lay eggs in. Sadly, our house is a vast desert and Degarla was not found for 36 hours. She was closed up tight and still alive but dying. I quickly put her back into the water but that only led to a lingering death. I called the pet shop to ask if there was anything more I could do and they said no. I still miss her. Ebriah has since fallen into a deep depression—either that or he’s hibernating or maybe even dying, although I hope he’s not dying. The death of Degarla led to a huge ammonia spike in my 5.5 gallon tank. It was so bad that Gipsy Danger got ammonia burns on his face and beard. In a bit of a panic, since I didn’t want to loose Ebriah, Gipsy and the Vashta Nerada I put Gipsy in a small hospital tank and went out and got a 10 gallon tank (on huge sale) and a stand (also on sale) for him. 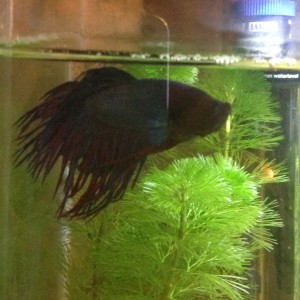 Since Gipsy Danger is such an alpha Betta and since he didn’t seem to care to share his tank with any interlopers I got the 10 gallon tank all set up, let the water cycle and then put him in by himself. He enjoyed the space but he didn’t seem like his normal self. So after a few days I put some cherry shrimp in the tank with Gipsy and he immediately, and I might add happily, started chasing them around. He never catches them but it makes him happy to have something small and not fish-like to chase around a bit. My cherry shrimp have had at least one surviving little shrimplet and is carrying another clutch of eggs. The ghost shrimp are settling in as well. One of them had a clutch of eggs but they never hatched. I don’t know if it was because of the ammonia spike or just because ghost shrimp are difficult to breed in an aquarium with a betta in it.

I put a lot of plants in my aquarium too. It turns out that the only plants I can keep alive in the house are aquarium plants, so now I have an indoor garden too and Gipsy likes playing in them, the shrimp like hiding in them. The snails seem to enjoy uprooting them. Well they used to. Ebriah doesn’t much like the big tank. He hasn’t been himself since Degarla died. I kept Ebriah in the big tank for two weeks and he never came out of his shell. Occasionally he would stick his siphon out but he never really moved around. So I put him back in the smaller tank. I hope he’s ok and he’s not dying too. Gipsy is doing very well. His ammonia burns healed up within the first week in the new tank and he sleeps and plays in his aquatic forest. I put in a little forest for him and he sleeps in it. After the first day he stopped chasing the shrimp around most of the time. Once in a while he’ll still chase them but I think he likes having them around to play with. I got him a new cave and he still likes to pretend he’s a moray and jump out at the shrimp to watch them scatter. 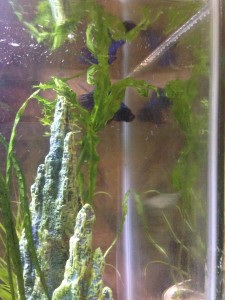