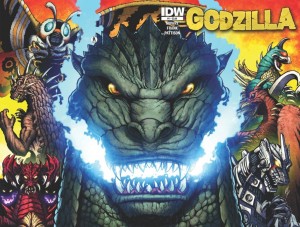 You can read my review of the five issues of Kodoja over at Fangirlnation . Kodoja Terror Mountain Showdown is about a giant robot and Kaiju. How can it go wrong? It doesn’t.

Currently I’m reading IDW’s Godzilla The Half Century War. I’m a quarter of a century through. K.