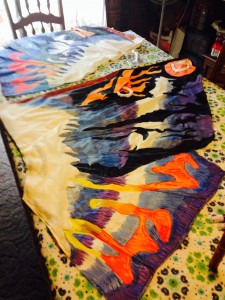 Inside of the Left Wing is done

With the holiday weekend affording an extra day to work on the Mothra cosplay I was hoping to get the paining finished on the wings. Since I have to mix the colors myself from the available fabric paints I have it takes a lot longer than one might expect. They are turning out beautifully but it is taking such a long time to paint them.

I ran out of blue and orange paint so I had to pick up more. This pushed my budget ever closer to the hard limit of $100.00 for materials. True when I started I was hoping to keep it around $50.00 but that starting budget was quite unrealistic and only goes to show how little experience I have with making cosplays. I should have just started with the more reasonable budget of $100.00, and a more seasoned cosplayer probably would have.

Even with a budget of $100.00 I’m still looking for bargains and using coupons to buy my materials. Goodwill, and store coupons are great resources for getting materials and keeping to a reasonable budget. This weekend there were some particularly good coupons for some of the local craft stores due to the holiday. That’s something to keep in mind when considering starting a new cosplay. If you plan it right you can get your materials during a big sale.

Better planning in general would have helped keep the cost down. I didn’t know how much paint the fabric I chose would soak up so that is costing me in additional paint. I’m sure someone who has been doing cosplay for a long time would have chosen different fabric, treated it differently and planned things out better than I have.

We did get a cheap table cloth, a plastic picnic table cloth to put on the table while we paint. It protects the table and makes it less nerve wracking when we paint on the only good sized surface in the house for crafting. 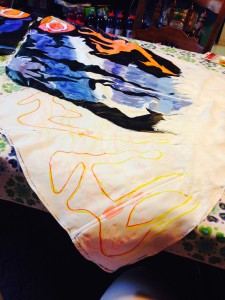 Outside of the Left Wing

All that being said, I still love what I’m doing and I love my costume. I’m learning a lot and having fun. My goal now is to get it finished up within the next two weeks. That includes touching up the paint where necessary, affixing the wings to the vest and stitching loops on the hat so that I can use bobby pins to keep it on my head in a crowded convention hall.

There are some flaws to the costume. I pretty much won’t be able to carry anything, so any tchotchkes or memorabilia I may want to pick up will have to be handled by one of my companions. The cosplay is designed to be portable though. I can roll the wings and vest up into a compact bundle to transport. The most difficult piece to transport will be the hat, due to the feathers. 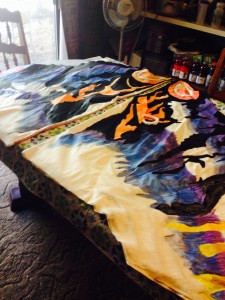 We got our tickets to ECCC (Emerald City Comic Con) today and I’ll be wearing it there for certain. I’m still looking to debut it at the RCCC (Rose City Comic Con) in three weeks. We will see how well it travels then. K.