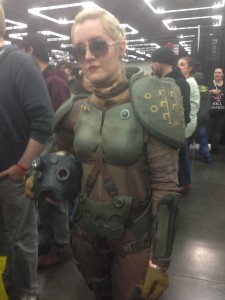 I’ve been busy having fun at the Portland Comic Con and as a result have not been good about blogging about it. Which is disservice to an excellent con. There were some rocking cosplays, quite a few in point of fact. I saw a fabulous I Dream Of Jeanie for the first time at a con. There were a bunch of Doctors, mainly the fourth Doctor, the tenth Doctor and the eleventh Doctor. I even saw a weeping angel get into a stare down with a mop-toting, fez-wearing, bow-tie clad eleventh Doctor. One of my top favorites was a fantastic Sasha Kaidonovsky, pilot of Cherno Alpha from Pacific Rim. There were a lot of Wonder Women and I was glad to see them. Also I saw quite a few Poison Ivys and this con I saw a lot of My Little Ponys and they were adorable. Elsa and Anna from Disney’s Frozen made their cosplay debut at this con and they were gorgeous every time I saw one. I could write a whole article about the fabulous cosplay and perhaps I should. 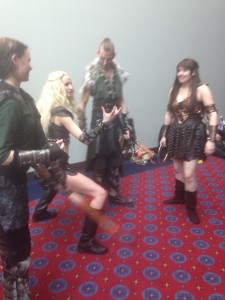 Today, though, I want to write about meeting Ron Perlman. I remember seeing him first in Beauty and the Beast when I was quite young. While he had many roles, I’m sure between that and Hellboy I was not aware of them and Hellboy is a movie I really enjoy. I never got into Sons of Anarchy so next I saw him in Pacific Rim which is far and away my favorite movie of 2013. So when I heard he was going to be at this con I was very excited.

What I really wanted to do was come up with something to say to him that would be as interesting for him as meeting him would be for me. I wanted to say something intelligent, or kind, or anything other than something a squeeing fangirl might say. Unfortunately I could not come up with something to say so, on Saturday, the first time I went through his autograph line I just smiled, shook his hand and said, “Thank you.” Ok, so not very articulate but not too embarrassing. He was charming and gracious.

Then I discovered that someone else in my party also wanted his autograph but had had to get cash. So, I agreed to stand in line with her the next time he was singing autographs to keep her company. That’s twice in one day I met him and he was very kind. THEN, because I had managed not to make a complete fool of my self by saying anything dumb, my nephew found out about the autograph opportunity and, since he doesn’t live in town and it was far too late and too expensive for his parents to ship him in for the con he begged me to get him a signed photo of Hellboy. What could I do? So Sunday I stood in line for the third time, feeling like a total dork because I had gone about this the most inefficient way possible and here I was for the THIRD time getting an autograph.

Mr. Perlman was gracious and if he recognized me (probably since I wore my steampunk cosplay each day), he didn’t make any comments about how many times I’d stood in line to see him this weekend–bless his heart for his kindness.

Ron Perlman is very good to his fans and he gets into character a little bit for each different character photo he signs. I’m glad I got to meet him, even if I could barely string two words together. Also one of his fans drew a picture of a dragon for him and he thanked her for it when she gave it to him. He said it was very nice. I would say it was totally worth standing in line three times to meet him. K. 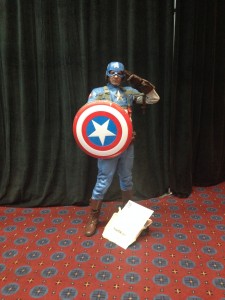 (Originally posted on M31publishing.com, posted here by permission of the author – me!)